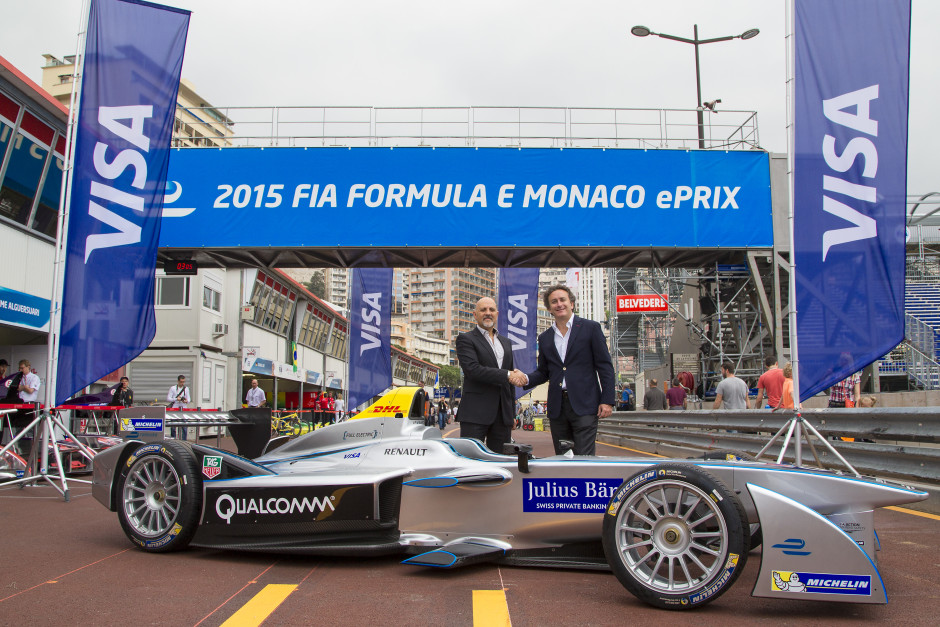 The deal sees Visa Europe become the official payment services partner for the Monaco ePrix, on 9May, DHL Berlin ePrix on 23 May, and London ePrix, on the weekend of 27/28 June.

Launched today by Mark Antipof, Chief Officer, Sales and Marketing at Visa Europe, and Alejandro Agag, CEO of Formula E, the cutting edge partnership will come into effect immediately, ensuring Visa’s engagement with fans of Formula E in Europe, through a mixture of social, digital and traditional marketing activations.

Mark Antipof said: “We are very excited with this affiliation that we see as the perfect combination of two truly innovative brands. Visa Europe’s vision is to drive innovation throughout Europe making payments simpler, smarter and more secure than ever before. With Formula E’s ambitious approach towards revolutionising electric motorcar racing, and the future of car engines, it’s the perfect complementary partnership helping drive the future in each segment.

“Through this partnership, our mission is to put fans at the heart of the races. We will be announcing a number of exciting activities over the coming weeks culminating in the season finale at the London ePrix.”

Alejandro Agag, CEO of Formula E, added: “Formula E aims to drive the change towards an electric future, while promoting clean energy and sustainability. Visa Europe’s clear commitment towards innovation, extensive experience within the market and broad audience reach makes this partnership a clear and bold step towards realising this future.”

Running until June 2015, Formula E is a new FIA single-seater championship and the world's first fully electric racing series. It sees ten teams competing, at speeds of up to 140 mph, in 10 of the world's leading cities including Monaco, Berlin and London. The 10 teams, each with two drivers, race on bespoke city-centre circuits creating a unique and exciting series designed to appeal to a new generation of motorsport fans.